Brentford FC currently has detailed planning permission to build a new, purpose built, 20,000 capacity Community Stadium on a 10 acre site in Lionel Road South, Brentford, for first class, professional football and rugby. The site is located between Kew Bridge Station and the A4 and M4, close to Chiswick roundabout.

The Club has signed a development agreement with Willmott Dixon, which has secured detailed planning permission to build 648 apartments on the site, and to subsequently build 75 townhouses at Griffin Park, where the Club currently plays. Griffin Park will be transferred to Willmott Dixon by the Club once the new Stadium is operational. The Club will continue to play at Griffin Park until then.

The Club has purchased land on the Duffy site on the western edge of the Lionel Road site, on which Willmott Dixon plan to build a further 262 apartments. The Club has outline planning permission for this development, for which detailed permission will need to be sought by Willmott Dixon in due course.

In April 2016 Hounslow Council received Government approval for a Compulsory Purchase Order (CPO) to buy the remaining land needed by the Club before any work can start on the site. On 1st September 2016 the Council completed this process by acquiring the land required to deliver the project.

On 8th September 2017 planning amendments were submitted to Hounslow Council proposing amendments to the stadium, the overall masterplan and the first phase of residential development. These are currently being considered and is anticipated that a decision will be taken by the Council at their Planning Committee on 7th December 2017.

The stadium development will also provide a new home for the award winning charity the Brentford FC Community Sports Trust. 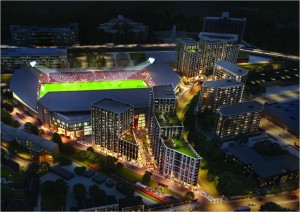